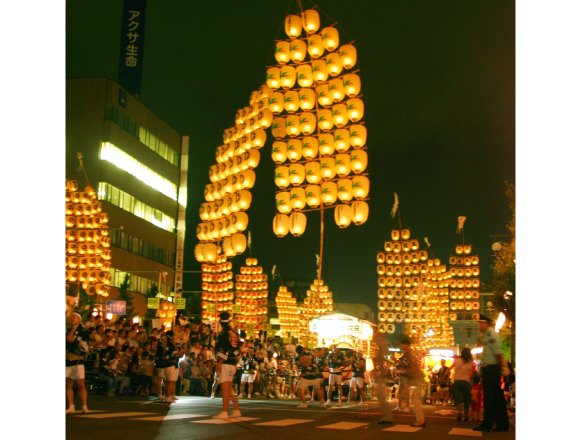 Akita prefecture has 17 different kinds of nationally designated, intangible, folk cultural properties which is the largest number throughout Japan. The big event that gathers festivals, traditional cultures and other folk events is coming up this fall. It’s named “Traditional Cultures Festival: Shin Akita no Gyoji in Odate 2016.” It is a new type of event where you will be able to experience Akita’s traditional culture in Odate Jukai Dome, Odate city. There is a main stage inside the dome which holds more than 2000 seats where you can see the strong and powerful performances. There are also booths near the stage where you will be able to see other performances. The program consists of “Akita no Kanto” from Akita city, “Kemanai no Bonodori” from Kazuno city, “Honkai-Shishimai-Bangaku” from Yurihonjo city, “Tsuzureko no Odaiko” from Kita-Akita city, “Odate-Shinmeisha-Reisha no Hikiyama Gyoji” from Odate city, “Sannai-Bangaku” from Gojome-machi, and “Namahage Daiko” from Oga city. You will also be able to participate in some experience such as holding “Kanto” which is a bamboo pole bearing many lanterns and dressing up as “Namahage” which is a Japanese folklore demon-like being. The traditional craft of making containers such as lunch boxes by bending wood called “Odate Magewappa” from Odate city will be exhibited as well.

At the same time, there will be a food festival for many different kinds of meat dishes from this area called “Niku Haku ~Niku no Hakurankai in Odate 2016.” Outside of the Odate-Jukai Dome, booths which sell Hinaijidori, one of the most popular chicken brands in Japan, Odate-Sakura pork, Akita beef, and horse meat will be lined up. Other than these, there will be a lot of booths that advertise sightseeing spots, foods, sake, hot springs, and special products from this area. These events in Odate where people can enjoy watching and experiencing many different traditional events from Akita will attract a great deal of public attention.

Access : A free shuttle bus will be running from JR Ou Main Line, Odate station to the Dome.

It takes about 2 hours to go from Akita station to Odate station on the JR Ou Main Line.