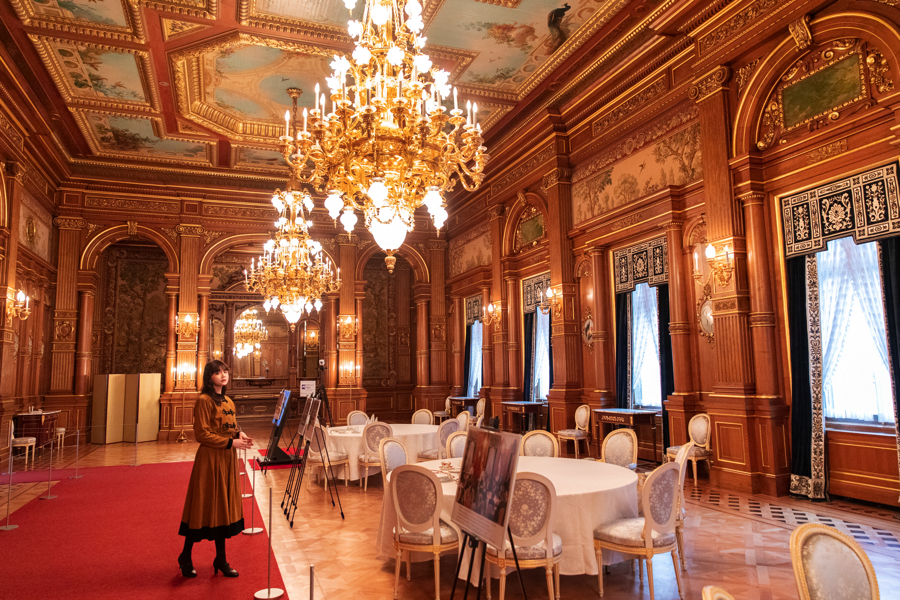 Akasaka Palace―a building that has welcomed emperors, presidents and prime ministers across the world into its architectural wonders. While it is mainly used for official purposes, did you know that it also offers a public viewing, one that doesn’t hinder on business affairs?

The palace is considered a national treasure of Japan. I paid a visit to this gorgeous edifice that looks just like a European-style palace. Photography is strictly forbidden when visiting, but I was able to receive special permission to cover the inner secrets of this exclusive wonder. 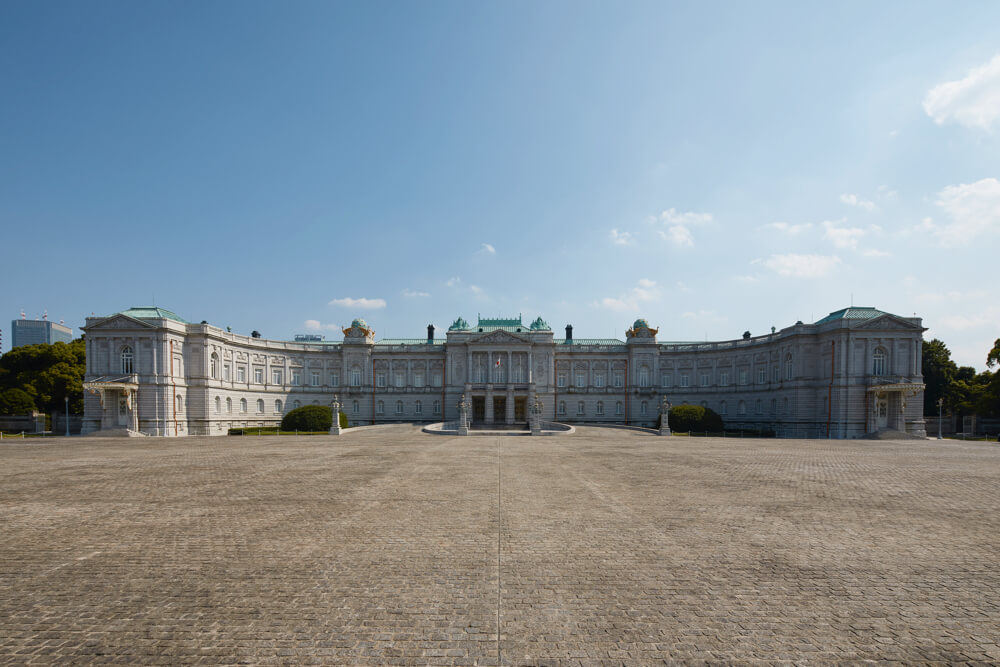 Akasaka Palace is open throughout the year. There is a daytime reception that lets you enter without having to book a spot in advance (though you’ll have to book if you want to visit the Japanese Style Annex). Visitation is restricted when international state officials are present, so when planning your trip be sure to check the palace’s schedule on the official website. Visitation through the daytime reception begins at the West Gate. 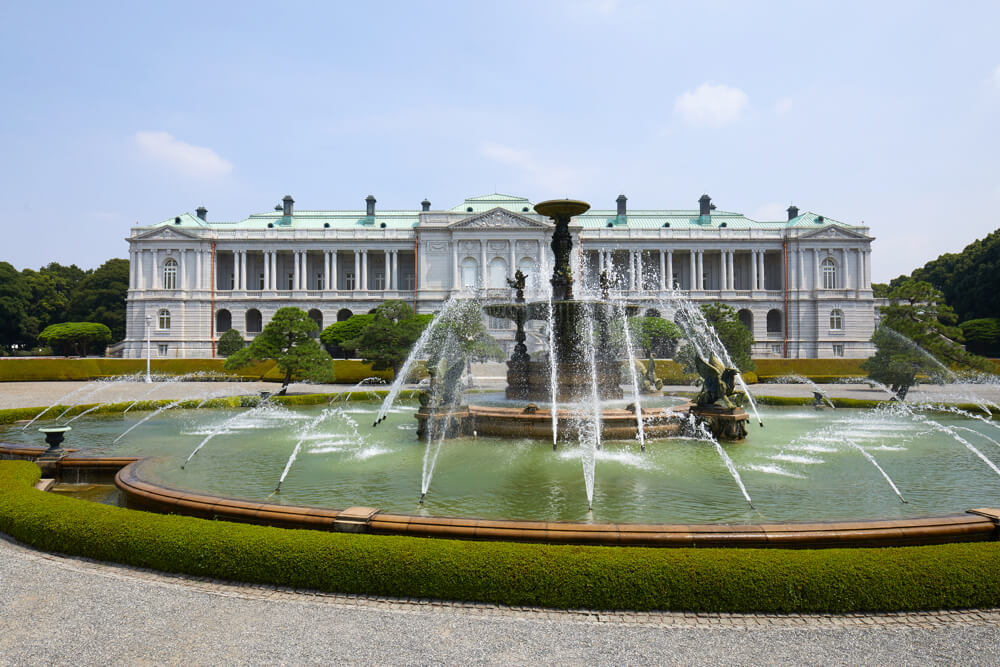 Originally built in 1909 as the Imperial Palace for the Crown Prince, the building is the only example of neo-Baroque architecture in Japan. It was built by Japanese imperial court architect Katayama Tōkuma. When planning the design for the building, he referenced various palaces across Europe which is why people liken it to Palace of Versailles in France.

Hagoromo no Ma – A reception hall for visitation welcomings 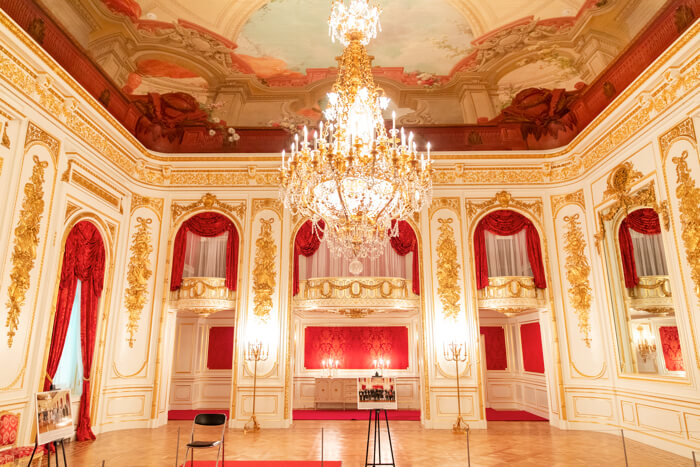 The first room you come to on the public viewing is “Hagoromo no Ma.” It was originally called a ball room which is why it houses orchestra boxes. Aperitifs dance around the room for invitees who may be there for send-offs, dinner parties or even musical performances. 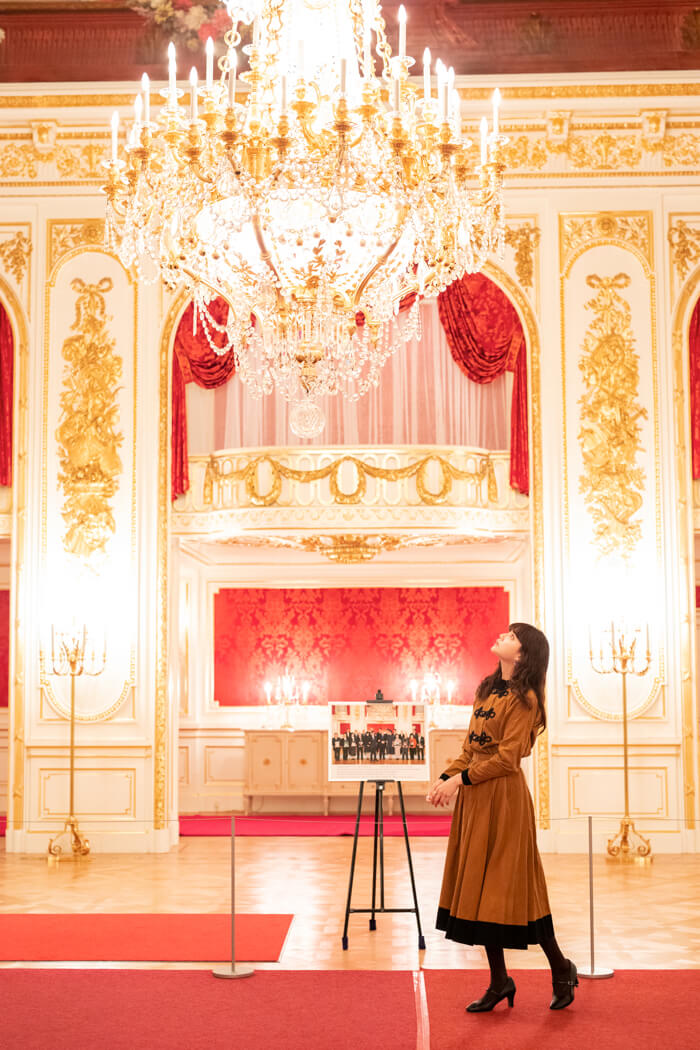 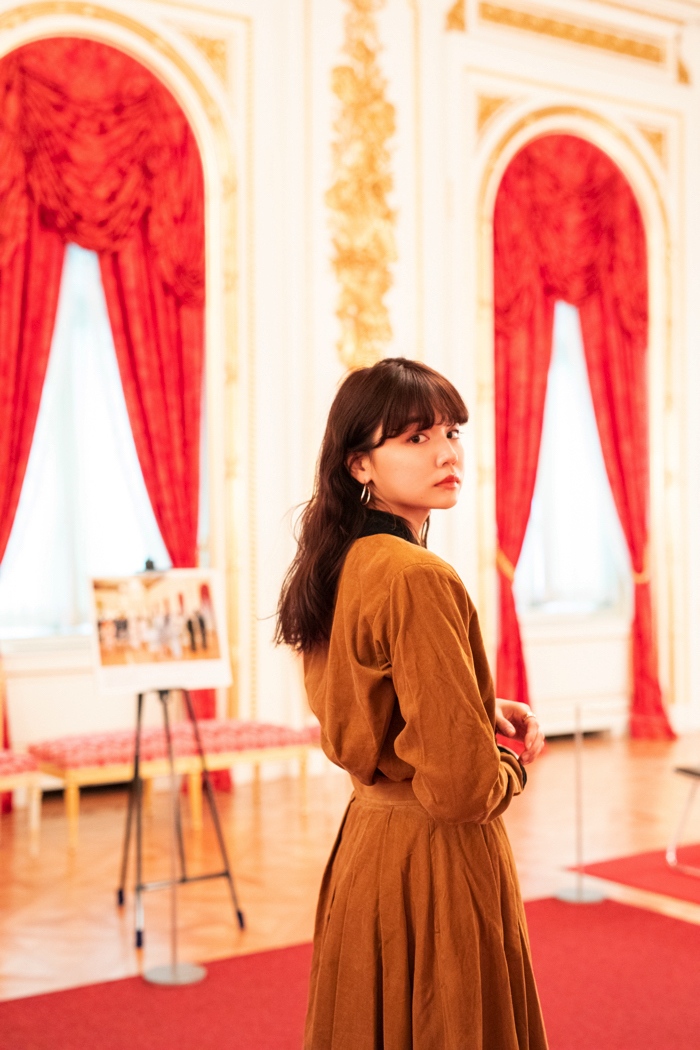 Overhead is a gorgeous chandelier which is made up of almost 7,000 separate parts, most of which is crystal. It is the biggest chandelier in the entire palace. The inner part of the mezzanine floor, which looks like a balcony, is used as an orchestra box when the room is used for orchestral concerts.

The intricate design of the chandelier includes masks inspired by a ball while the walls too are littered with relevant motifs such as instruments. The whole room is decorated in all things musical.

Asahi no Ma – The most high-class room of the palace 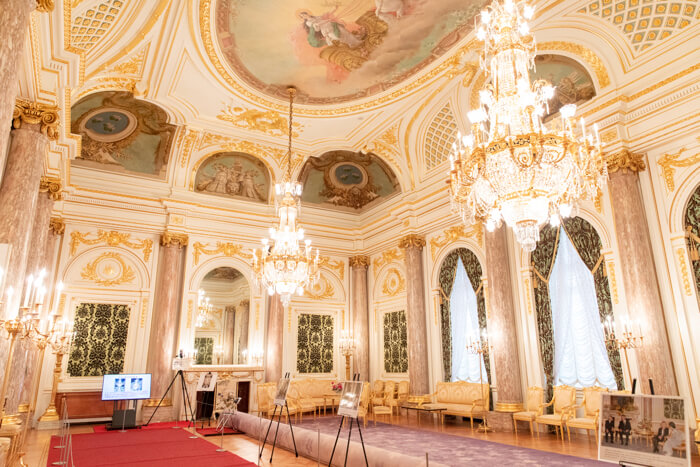 The next room you step into is “Asahi no Ma” which is used for courtesy calls of officials and important people as well as summit meetings. It is the most high-class room in all of Akasaka Palace and is where the state guests say their goodbyes to the Emperor and Empress. The room began reconstruction two years ago and reopened in April this year. 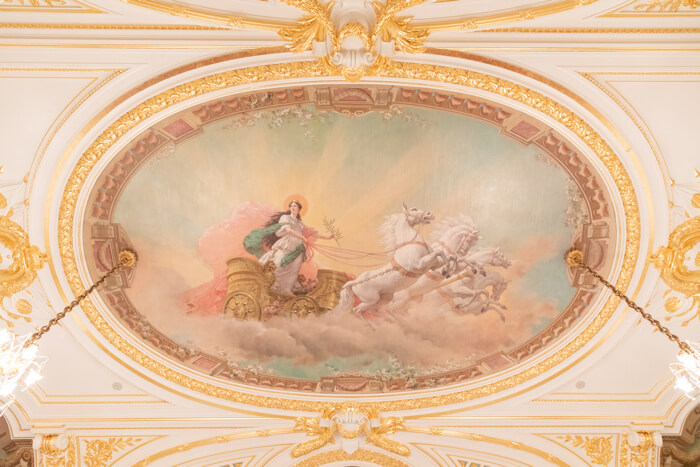 The room gets its name Asahi (“morning sun”) from the painting of Aurora, the Roman Goddess of dawn, that overlooks the room. 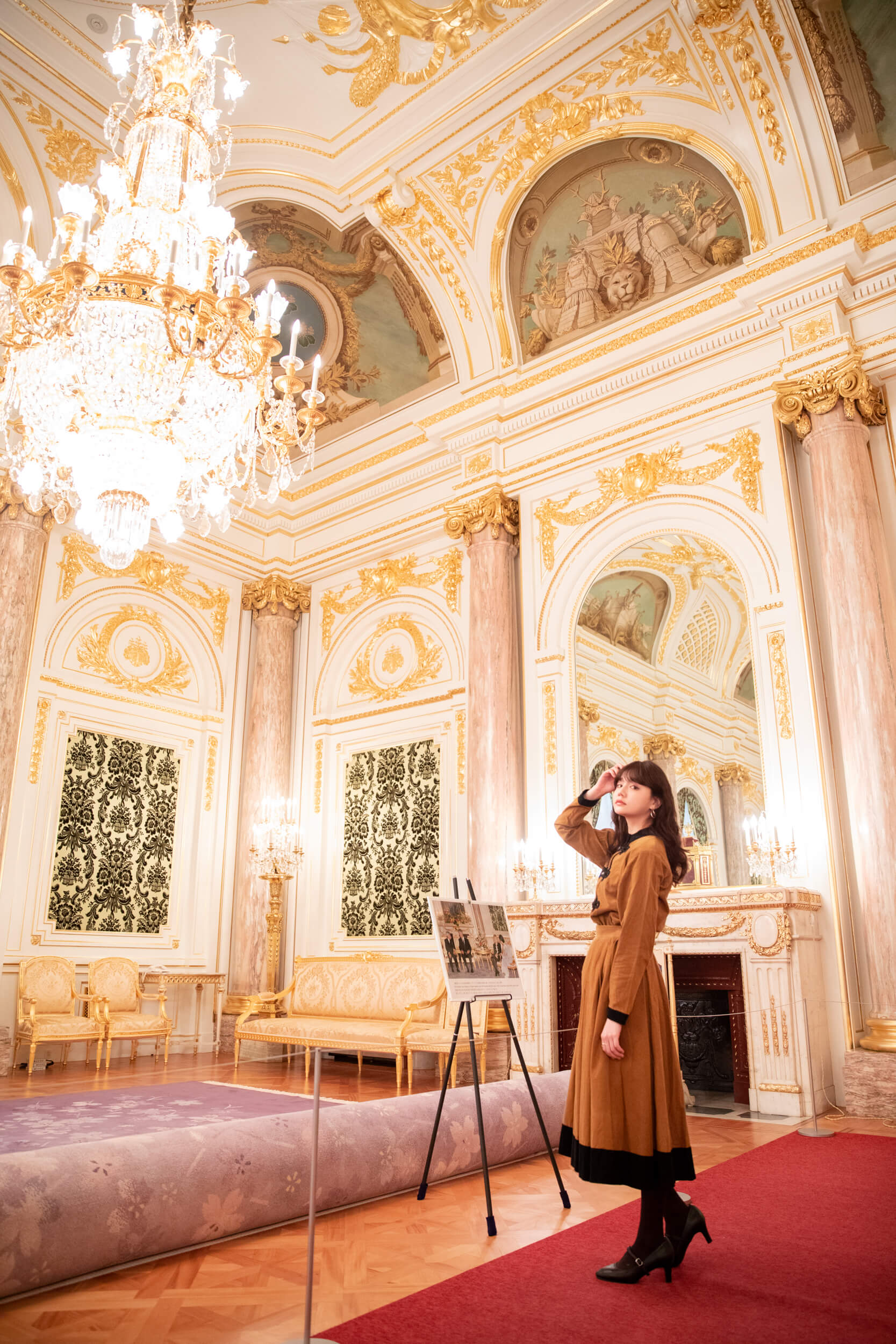 It is said that in the Meiji Period, when the palace was built, people painted pictures of helmets to symbolize the army and boats to symbolize the navy as the country declared the political measure known as Fukoku kyōhei, which meant to “Enrich the Country, Strengthen the Armed Forces.” 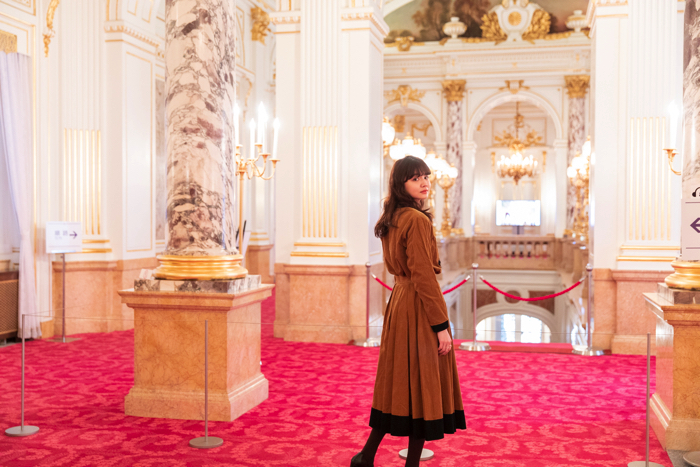 The “Shoumen Genkan,” or front entrance is where international guests of honour are welcomed. When visiting during public opening hours you don’t enter from this entrance but you are allowed inside. The large hall, which is located up the stairs from the hall that continues through the entrance room, has a striking and vivid deep crimson carpet. Together with the eight towering marble pillars, this hall makes for an overwhelming viewing. The room directly opposite down the stairs is Asahi no Ma.

Sairan no Ma – Where treaties are signed 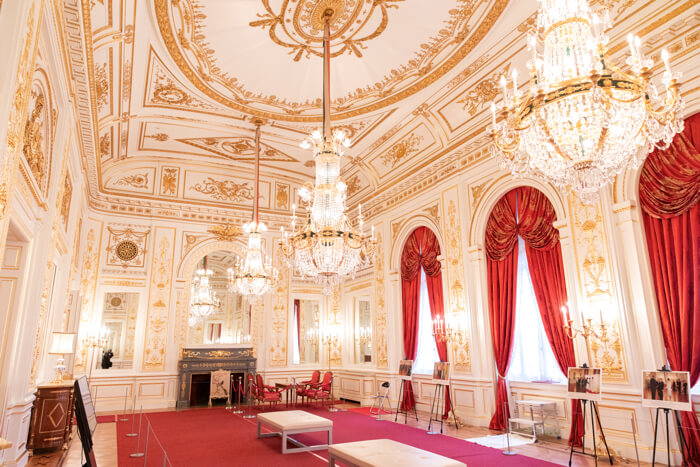 The next most high-class room from Asahi no Ma is “Sairan no Ma” which is primarily used for signing ceremonies of treaties. When Asahi no Ma was undergoing renovations, this room was used for informal talks carried out by the emperor and prime minister with foreign rulers. 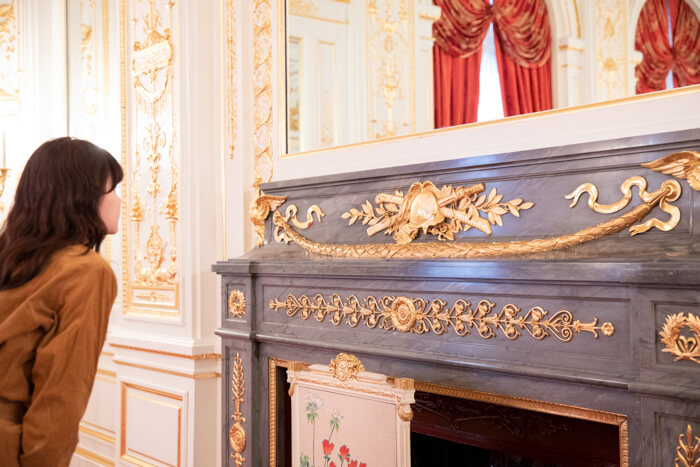 The entire room takes on the Empire style which was popular during the rule of Napoleon I. Scattered throughout the room are gold leaf designs of armour, helmets, swords and so on.

Kacho no Ma – Dinner parties with guests of honour 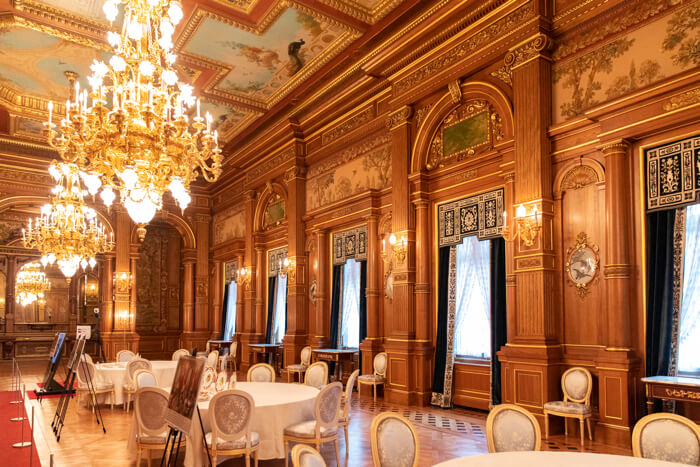 Kacho no Ma is used for dinner banquets with important official from countries around the world. The room has a more relaxed feeling from the others due to its interior wooden design. It’s also often used for press conferences so those who watch Japanese news may recognise it. 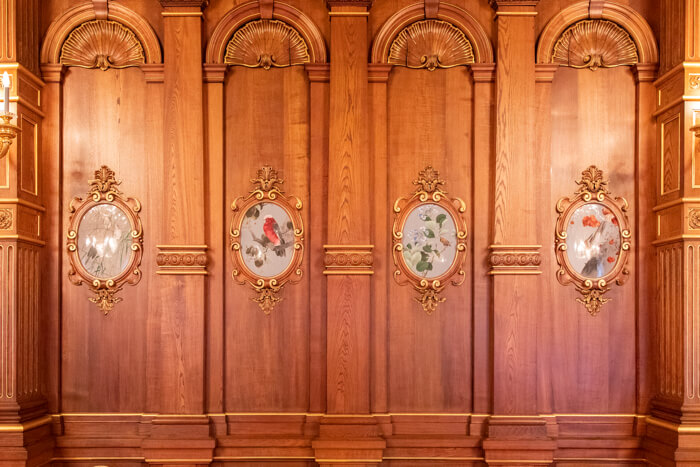 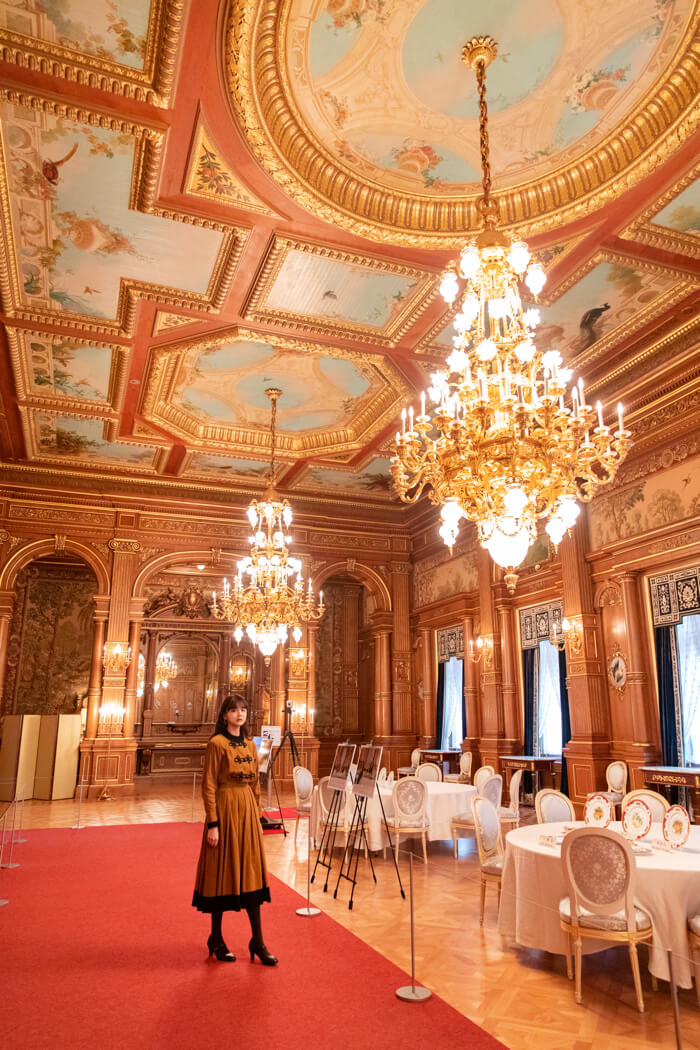 It also has the heaviest chandelier in the palace inside which is a globular speaker. 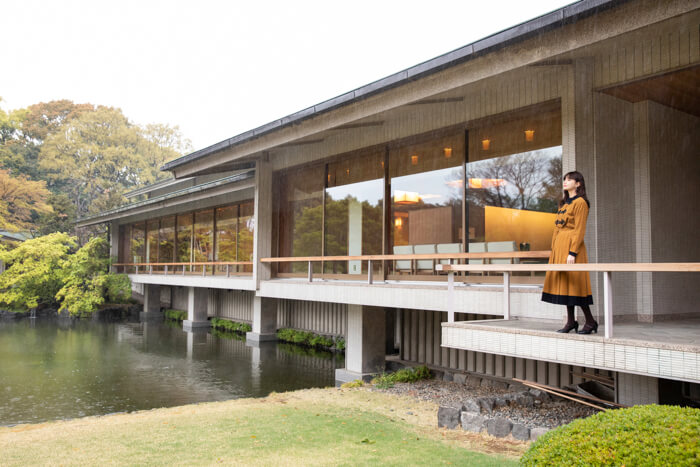 The Yushintei is located in the Japanese Style Annex on the west side of Akasaka Palace. It was built in 1974. Akasaka Palace carries out events and receptions in a western style but the Yushintei welcomes international guests of honour with Japanese-style hospitality. Those who wish to enter must book in advance. The booking comes with a tour. 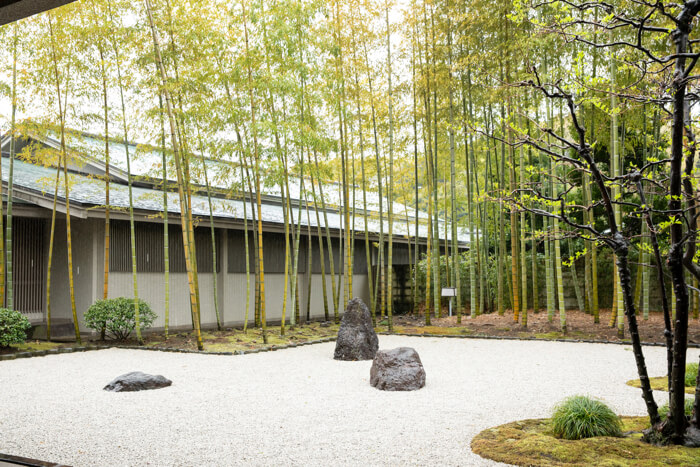 As you step through the entrance and into the inner garden through the passage, you will see moso bamboo. This area has a garden with shirakawa gravel and kibune stone from Kyoto. 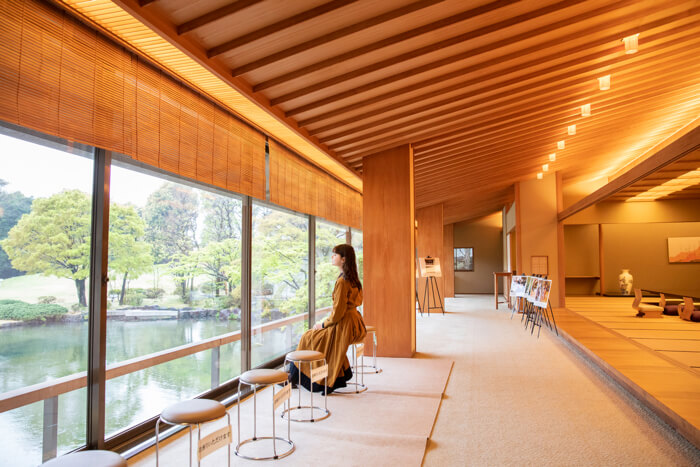 In the main Japanese-style room where guests are served Japanese food one can observe the pond from the window. You might recognise it as the place where Prime Minster Shinzo Abe and President Donald Trump fed the fish. 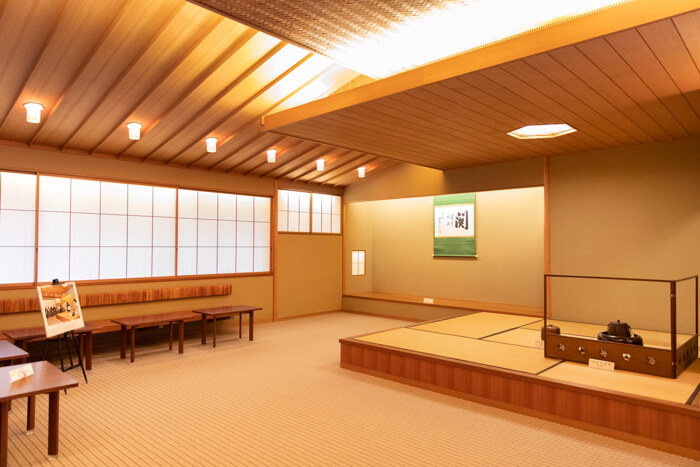 The tea room comes with chairs for foreign visitors who are unable to sit in the traditional Japanese seiza position. Tea is prepared on the upper step which is inspired by Noh theatre. 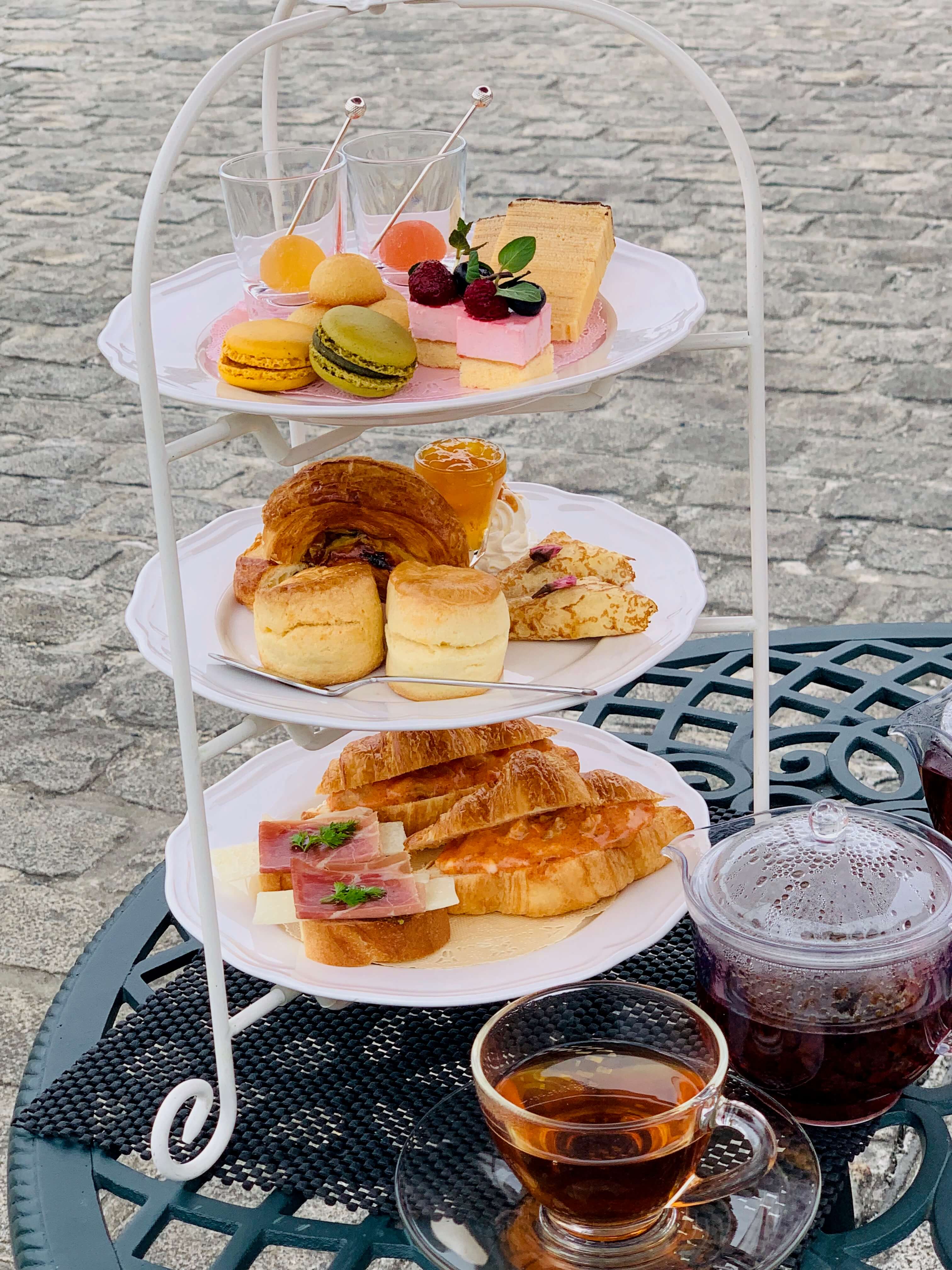 20 afternoon tea sets are prepared each day to be enjoyed in the front garden of Akasaka Palace. These cannot be reserved in advance so be sure to arrive early if you’d like to order one. As you enjoy your afternoon tea while gazing around you are filled with a gorgeous feeling you can’t experience anywhere else. 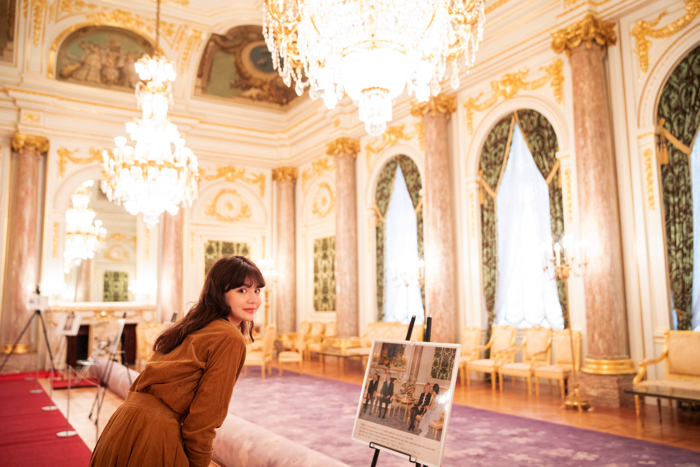 The general public viewing offers a chance to see numerous parts of the palace. We asked Rinko Murata, who’s pictured in the photos on the viewing, for her thoughts.

“With the first step you take in a gorgeous space unfolds before you. Its grand design made me feel as if I had been summoned to the palace. It was like visiting a foreign country. When you look closely there are lots of decorations that symbolize Japan. It was a fresh experience where you can feel both the Japanese spirit and culture of another country. I feel moved that Japan has such a place as beautiful as this. You all need to visit too.”

There is no requirement to book this viewing in advance, but during busy times (20+ people) those who do book online prior to visiting will be prioritized. Foreign visitors won’t miss out on anything either as they can purchase a voice guide machine for ¥200. These guides come in Japanese, English, Chinese, French and Spanish. A visit to the Japanese Style Annex Yushintei however requires booking prior to your visit. When doing so you can choose between either a Japanese or English-speaking guide. In the case of a sudden official reception, all scheduled public viewings for that day are cancelled, so be sure to check the calendar on the official website before heading there.

Access: 7-minutes on foot from Yotsuya Station via JR and Tokyo Metro

*The above listed prices are the general prices. Prices may change during special openings.

Rinko Murata works in fashion and is active on radio and TV. Sales of her first style book were so successful that it required extra printing during its first week. She also has a rapidly growing following on her social media. As well as modelling at big fashion events, she has her own column online at “She magazine,” and receives much attention for her work in the areas of culture and lifestyle.