Audience of over 1000 persons were filled with excitement! Wednesday Campanella’s live was held in Taiwan 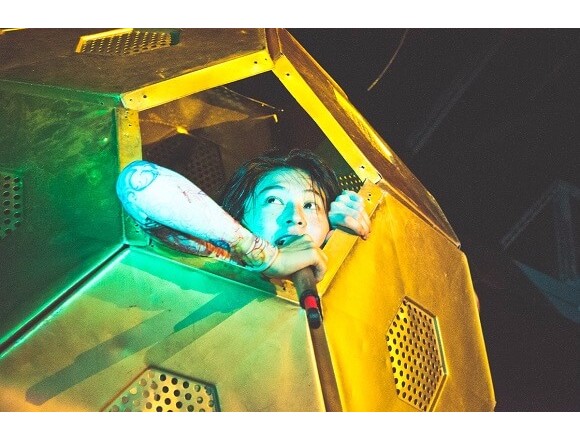 KOM_I held her first one-man live in foreign country cities (Taipei and Taichu) on the 13th and the 14th of October.

She was the only Japanese artist participating the popular event “Legacy Presents 2017 Toshinyosei” and more than 1,000 persons gathered at the venues in Taipei and Taichu.

The venue in Taipei was a preppy spot “Kazan 1914 Bunsoenku” which used to be a vacant lot inside an alcohol factory when Japan occupied Taiwan. It is a mysterious, but nice spot where trees grow skyward out of the building stuctures. Whether in Japan or in a foreign country, Suyobi no Capmanella always creates her own stage from scratch based on the inspiration she receives from the venue. The opening song of the live was “Gogh” and the song started after a light was radiated from the darkness. The light flickered in the darkness and KOM_I’s voice resonated in the venue mysteriously. Then, the curtain opened after the intro of “Chosei” started and the venue was filled with excitement when KOM_I appeared on stage. The audience reacted to the energy from KOM_I who was running around the stage actively. After that, the stage was covered with a curtain and a mysterious rendition showing the silhouette of KOM_I with colorful clothes was shown.

The audience took in the energy from KOM_I who was running around the venue while performing “Wright Brothers.” She performed “Momotaro” lastly and was put inside a water ball. She dived into the audience seats and the live ended with excitement. She also said goodbye to the audience in the local language. She performed “Ikkyusan,” “Amenouzume” and “Marco Polo” after receiving an encore. The door at the side of the stage opened slightly and she left from the stage. The audience remained silent for a while but were filled excitement. The live ended while the audience was craving for KOM_I to appear again on stage.

“I want to come here again next year” says KOM_I. Can’t wait to see her next live in Taiwan.