MMN Interview: SCANDAL look back at their overseas performances since their debut and going from “anime characters” to a “band” (Part One) 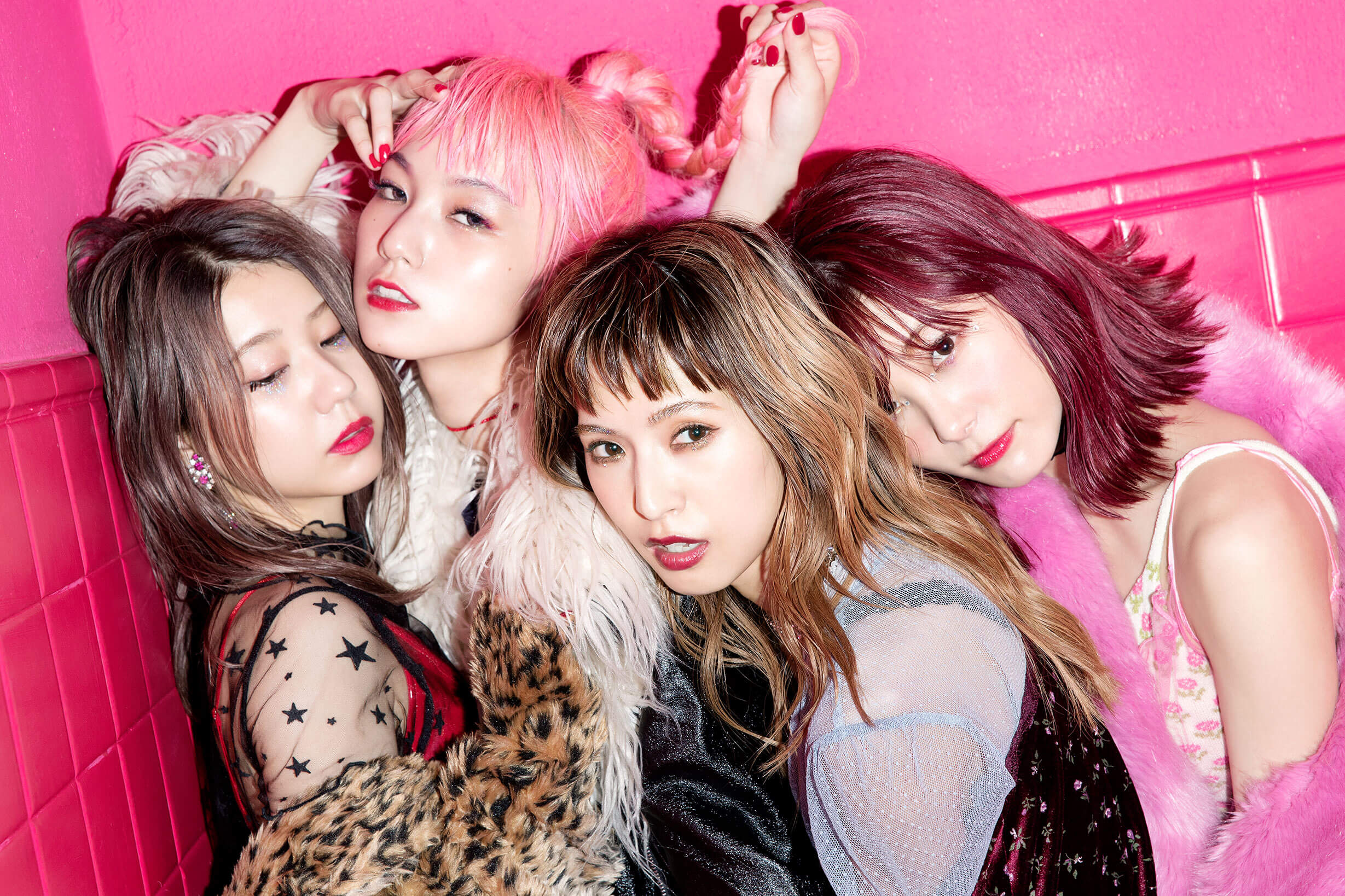 In 2016, SCANDAL toasted to ten years since their formation, and this autumn, they will celebrate their 10th anniversary since their major debut. The band released their eighth album HONEY this month which peaked at number one on Japan’s iTunes album charts on the day of release and ranked number one in iTunes J-pop charts across the globe including Hong Kong, Thailand, Singapore, Malaysia and Peru. Last year, 3 of the band members – Haruna (Vocals/Guitar), Mami (Guitar/Vocals) and Tomomi (Bass/Vocals) – became the first Japanese female artists to sign an endorsement agreement with Fender. It is evident for all to see that SCANDAL are building and fortifying their career as an all-girls band representing Japan in both name and reality. In this interview, the four members looked back at their overseas activity and told various stories from their perspective as an all-female band.

■”I think people overseas felt that we were performing anime characters”

――In the “HISTORY” column of your 10-year anniversary website, you have a timeline for your music activities for both Japan and the rest of the world lined up side-by-side. I felt that this was a reminder of how your band are enthusiastic about activities overseas. Your first overseas action was an American tour across six cities before your major debut in 2008. That’s amazing.

Rina (Drums/Vocals): Yes, our first tour was in America, wasn’t it? We did all of that despite being an independent band who hadn’t even toured Japan yet. Back then we went forward with finishing everything we did to the end like crazy every time, but we had a strong connection overseas at the time, so from that year onward we went there every year without fail. At first, we felt like we were just children without a cause, but we gradually became something that couldn’t be ignored. Bands would cover our songs overseas, and the number of people who came to like us after watching us on YouTube went beyond our imaginations. Our fundamental stance is to go and perform in places where there are people demanding for us, so we focus on performing live without creating borders around the world.

――I see. Looking in detail, your first few years saw you perform at a lot of Japanese culture festivals such as “Japan Expo” and “AM2.” That was a time when you performed in uniform-style costumes, wasn’t it?

Mami (Guitar/Vocals): It was.  The “Age of Uniforms” (laughs). That was a time when we did theme songs for anime, so the uniforms were part of it. We were also called to perform at a lot of festivals that promoted Japanese culture too.

Tomomi (Bass/Vocals): In our early days, we even had an animation kind of thing of us all on our official MySpace page. And we received a lot of attention from people overseas, so it felt like “animation” was spreading across the world as part of Japanese culture.

――From your experience having stepped onto the international stage, have you felt a desire for Japanese culture overseas, and by extension a culture for Japanese girl bands?

Haruna (Vocals/Guitar): We were also unaware of it at the time. We were simply happy with the demand and could feel the joy of being able to perform live in lots of places, so that’s why we went. It might have only been recently that we became conscious of looking to overseas seriously as a girl band.

Rina: I think that awareness strengthened when we came to perform solo shows. And our overseas fans also changed with it. At culture festivals, there were many people there simply out of curiosity who weren’t our target goal, and there were a lot of people who were also interested and felt Japanese culture in the seifuku costumes. I think from the point of view of people overseas, it felt like we were like anime characters performing.

――In 2015, you held a huge world tour where you performed 41 shows across Japan, France, the UK, Germany, America, Mexico, Singapore, Taiwan and Hong Kong.

Rina: There were more people who had watched our music videos on YouTube than those who knew us from anime on this tour. I felt that people came along to support us as a band. The atmosphere was totally different in the venues too compared to our early days.

Mami: I believe there’s something historical about being in a position where people know your existence from social media and video-sharing websites. When we began our career, social media still wasn’t being used all that much in Japan, and YouTube as it’s used today wasn’t a thing. I feel the change in times with regard to our connection overseas.

――Having toured 9 countries, please tell me about any impressions that have been left on you, on or off stage.

Rina: We’ve had the opportunity to do a lot of interviews, but I’ve noticed that the content of the interviews have changed from place to place. Before, we’d get asked a lot of questions related to anime like “What do you think of anime?” and “What kind of anime theme song do you want to do next?” But now the questions are focused on the band itself. It made me feel that “SCANDAL” had come to be seen as a band in and of itself, without anime.

Mami: Mexico and South America in particular are places where the way in which Japanese bands are viewed on YouTube are different from other countries. In other countries, anime and manga take priority. How people find us derives from there most of the time. But in South America, “Japanese bands” are an established cultural genre. They search for Japanese bands from the get-go, they find their favourite and share it with friends. That’s how we’re introduced over there. I was really happy that they viewed us in that way.

Rina: Something I remember from on-stage… The way people enjoy live performances. I saw how each country really does have its own unique culture. In Japan I don’t think we have that style of support where we hold up our country’s flag, but there are places where people have fun by waving their own country’s flag and drink and dance.

Tomomi: For example, football is really popular in Mexico. When we turn the lights off in the venue, people chant “Olé, Olé, Olé” like a sports match.

Rina: Right? When we toured Europe, there was someone on stage [to introduce us and] get the crowd excited. They’d say something like “Here’s SCANDAL!” and the sound effects would begin playing (laughs). I noticed how the beginning of shows was different in each country and location.

Haruna: In Asia, there were a lot of times where everybody sang together. It happens a lot in Japan too where people sing the chorus together, but elsewhere they sing the entire song from start to finish, don’t they?

Rina: So much so that everyone’s voices become even louder than Haruna’s mic volume (laughs).

Mami: Taiwan, Hong Kong and Singapore were just like that, weren’t they? Usually people listen and are just there in whatever way they like. Their love really got through.

Tomomi: Something I find different from Japan are people’s interests. There’s a real diversity in the people that attend, from older people who look like fans of that venue to the edgy punk type. I’m super interested in how they came to know SCANDAL. Well, I know social media is big, so if it was 10 years ago, I think the people who we couldn’t meet will come to our world tours now.

Rina: It’s precisely because we can look up and find our favourite things that our interests are so broad.

■”It doesn’t matter how we’re perceived, what’s most important is that people can enjoy us”

――Have your perceptions changed in relation to performing?

Rina: Strictly speaking, we’ve made a lot of changes to our sound and equipment, but our songs are all sung in Japanese, and I feel that wherever we go to perform I want to do everything the same without any changes. What does change is how we communicate with fans on-stage. We’re working hard to be able to speak in a country’s language as much as possible.

Mami: People really get in the music easily, so if they’re excited, they’ll join us. I feel people come to the shows and have fun, so there are no worries there.

――This is a simple question, but do overseas music fans know the difference between idol groups and girl bands? Regardless of the use of instruments or not, do you think that there are people who perceive Japanese girl groups as “idols”?

Mami: I think their understanding of the word “idol” is different from that in Japan. In Japan, it’s a single genre, but overseas, it’s someone who has an influence on you or someone you love. It’s someone you yearn for and someone whose existence is like that of a star. I think that grasp of the word is much stronger, so there might not be a lot of people who do make that distinction.

Rina: Don’t get me wrong, but I think either is fine. We don’t go out of our way to say “but we’re not idols.” Being seen this way means not giving special instructions and just have people come to like and enjoy our music. Because I think idols and bands are both cool. I find idols to truly be multi-players. They can sing, dance, act and have variety, and are really outgoing in a human way. Even in a band set-up, an idol’s nature can become their weapon of choice – their charm. I want us to be a group that can be enjoyed as humans, so even if there are people who see us as idols, I can say in all honestly that it doesn’t make us feel uncomfortable in terms of motivation. If people can enjoy us and say “They’re an interesting bunch,” then that makes me the happiest.