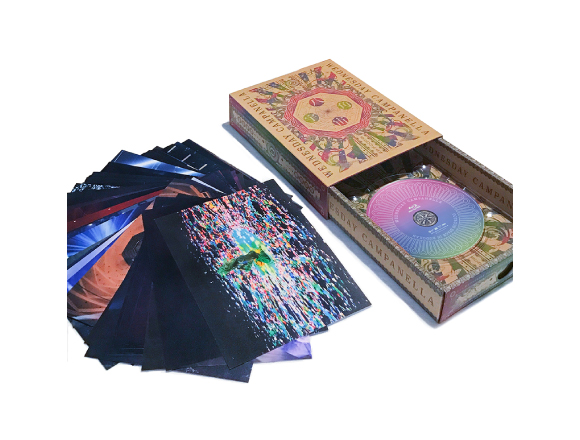 In the run up to their first ever video release, a Blu-ray of their concert at the Nippon Budokan, WEDNESDAY CAMPANELLA, who are currently on on their solo tour “One Man Live Tour 2017 ～IN THE BOX～,” have opened up a unique and interesting website. WEDNESDAY CAMPANELLA are known for creating fun and quirky websites. For example, you can play a game on their official homepage if you access it via your smartphone. They also set up a special website for their song “Aladdin” from their EP “SUPERKID” which came out last year. If you rubbed the magic lamp on screen, you would be able to listen to the song. WEDNESDAY CAMPANELLA’s new special website, which has been set up for their first Blu-ray release “WEDNESDAY CAMPANELLA Nippon Budokan Live ～Hakkaku Uchuu～,” not only includes the standard information about the disc’s content and the gorgeous packaging, but also a rather crude clipping of KOM_I herself, as well as a font and logo that look like they never made it past the template stage, giving the entire design of the website that early internet aesthetic. The sound effects on the website were made by KOM_I herself, as you can probably tell. Aesthetically, the website is the same when viewed on both a PC and a smartphone, but KOM_I’s performance is a little different on each.

On the PC page, if you click KOM_I’s mouth you will see the Blu-ray packaging flying through the air, accompanied by the sounds of her voice. You will sucked in through her mouth and into a website that looks like it was made by an amateur.

The smartphone page will be much appreciated by the younger generation who are concerned by the lack of gigabytes on their devices. The extremely simple design of the website means easy access for all. If you’re wondering what on earth kind of website this is, then you should most definitely check it out for yourself.