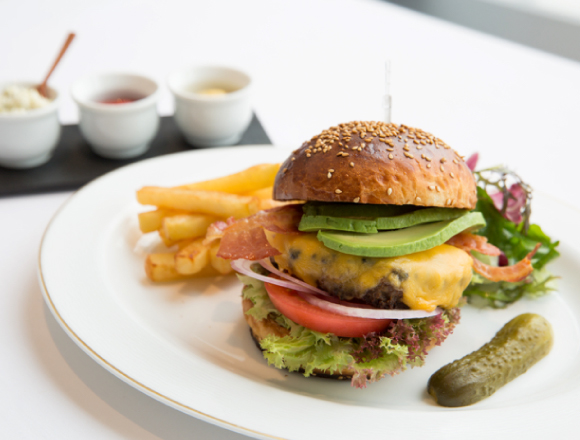 “UMAMI BURGER” from Los Angels has come to Japan this March, and draws public attention. However, the Japanese hamburger is as good as that. In these days, there are so many restaurants that serve “special hamburger” as good as the ones in hamburger stores. The latest trends of meat dish and casual dining boost the popularity of a gourmet hamburger. Especially, the lunch time only hamburger cooked by the chef who works for restaurants that granted the stars in Michelin Tokyo. In the “Tateru Yoshino Bis” located in “Park Hotel Tokyo,” there is an extreme hamburger created by Takeru Yoshino who is considered to be a French master. It was originally one of the lounge menus in this hotel, but it got very popular so he started serving it in the restaurant only at the lunch time. The hamburger is considered to be American food, but Yoshino added the basic French cook technique on his hamburger.

The weight of the beef patty is 150g. You can put some ketchup, mayonnaise and mustard just as old American style.

It is has the simple but well-balanced ingredients such as cheddar cheese, lettuce and crispy bacon. Only 15 plates of this is served in a day. It cost 1900yen. The hamburger from the restaurant which boasts meat dishes is as good as the one which is made by star chefs. There is a only hamburger in the restaurant on Saturdays, Sundays, and holidays called “ruli-ro” located in Mishuku that has a lot of good casual dining. Not only is the patty grilled over a charcoal fire, but also the combination of ingredients are great. It is great thing for hamburger fans that can enjoy the hamburgers not only in hamburger stores but also some dining restaurants.

There is a lot of ingredients such as sunny side egg and smoked bacon. Other than this, ratatouille burger and avocado burger are also popular. It cost 1500yen.

Related article：【Tokyo Dinner】The yakiniku restaurants that you want to use for special occasions.