Why don’t you go to safe bar that is owned by a beautiful lady chef? 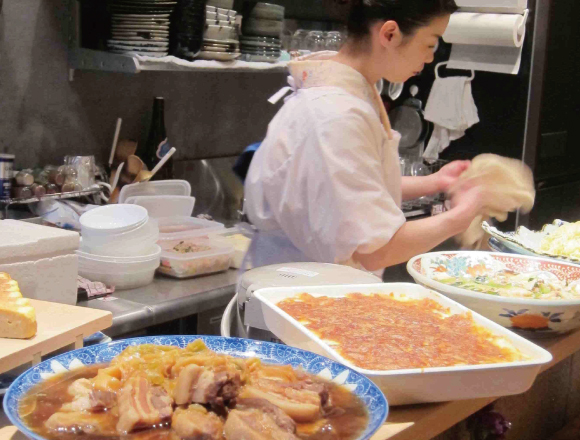 This little bar is owned by the lady who wears a coverall apron with a kimono. You can drink at the counter table chatting with this lady. The food coming with sake is clear broth soup, local fish sashimi, and Japanese steamed egg custard. These foods made me feel so comfortable. This bar that you can enjoy drinking by yourself is called “Yushima Yamaguchi” located in the drinking district in Yushima. The lady from Yamaguchi prefecture will welcome you with great hospitality and food cooked with ingredients sent back from Yamaguchi. The bar, which is primarily a wine bar, owned by the lady who also wears coverall apron with kimono where you can enjoy drinking by yourself called “Banzai Panda” in the site of the Japanese geisha district, Mitaka. Home-made thick omelet, potato salad, beef tataki and so on are lined up on the plain wood counter table. And there is a low dining table in the raised tatami-floored seating area. You can enjoy the Japanese wine in the Japanese style space. This is absolutely great.

Next » Shonen Jump Izakaya: Dine Like a Hero in Shinjuku’s Kabukicho District